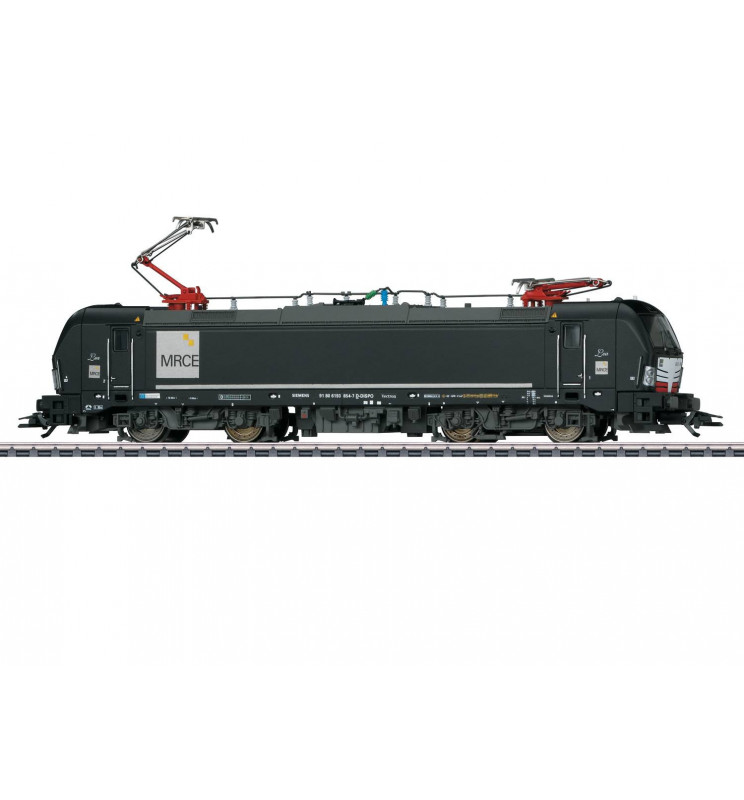 Model: This electric locomotive is constructed of metal and includes an mfx digital decoder and extensive sound functions. It also has a special motor, centrally mounted. 4 axles powered by means of cardan shafts. Traction tires. Triple headlights and dual red marker lights change over with the direction of travel, will work in conventional operation, and can be controlled digitally. The headlights at Locomotive End 2 and 1 can be turned off separately in digital operation. When the headlights at both ends are turned off, then the "Double 'A' Light" function is on at both ends. Warm white and red LEDs are used for the lighting. There are 2 mechanically working pantographs (no power pickup from catenary). Length over the buffers 21.8 cm / 8-9/16".

36182+47 130+47131 – MRCE Vectron and Hauling Away Excavated Earth from S 21The German Railroad has to manage large tasks on the big project Stuttgart 21. Among them are the approximately 20 million metric tons of excavated earth that have to be hauled away from the big construction site. To do this, the DB set up a special loading terminal in the Stuttgart North freight yard for transport of excavation material. The loading at Stuttgart North also forms the crux of the entire concept, because each train must be loaded here, made up correctly, and inspected as well as the train's paperwork finished before the run can start. In the process, the DB uses only containers as a means of transport since this enables trouble-free handling and easy transport by truck to the landfills. By contrast, using dump cars would limit disposal to only a few landfill sites with their own railroad sidings. The excavation trains usually consist of 20 each container transport cars, each car loaded with two containers. At peak times, the DB leases up to 400 container cars from AAE Cargo (Ahaus Alstätter Eisenbahn Cargo, Inc.). For the most part, type Sgmmnss 40 four-axle short flat cars are used, but type Sgns flat cars can also be seen. For motive power for these trains the DB has also leased Vectron electric locomotives from MRCE, the class X4E (= class 193).The overwhelming number of excavation trains go to trans-loading points at Wilhelmsglück, Deisslingen, Nordhausen, and Röblingen am See. At peak times, up to 13 trains a day leave the loading terminal at Stuttgart North – a gigantic logistical task in the greater Stuttgart area. In Wilhelmsglück (near Schwäbisch Hall), the firm Leonhard Weiss is filling in a former quarry, whereby here the handling is done with a "Reach Stacker" on the truck directly at the siding location Wilhelmsglück. The handling of containers at the siding location Knauf in Deisslingen on the line Rottweil – Villingen is done by two "Reach Stackers", whereby the containers only have to go another few hundred meters by truck. There a former gypsum quarry of the firm Knauf is waiting to be filled, whereby a natural marvel is to be filled with up to 1.5 million metric tons of excavation material. The first excavation trains from Stuttgart had Nordhausen in Thuringia as a destination. Some of the containers were taken directly to Nordhausen (connection point a gravel plant), while others were hauled to Niedersachswerfen. There the Kohnstein Mine, Inc. also uses the material for filling. The location Amsdorf is served via the Röblingen am See Station (Saxony-Anhalt). In Röblingen am See the firm Romonta has its own siding, where handling to trucks is done with "Reach Stackers”, which transport the excavated material to stabilize surface mining in Amsdorf.