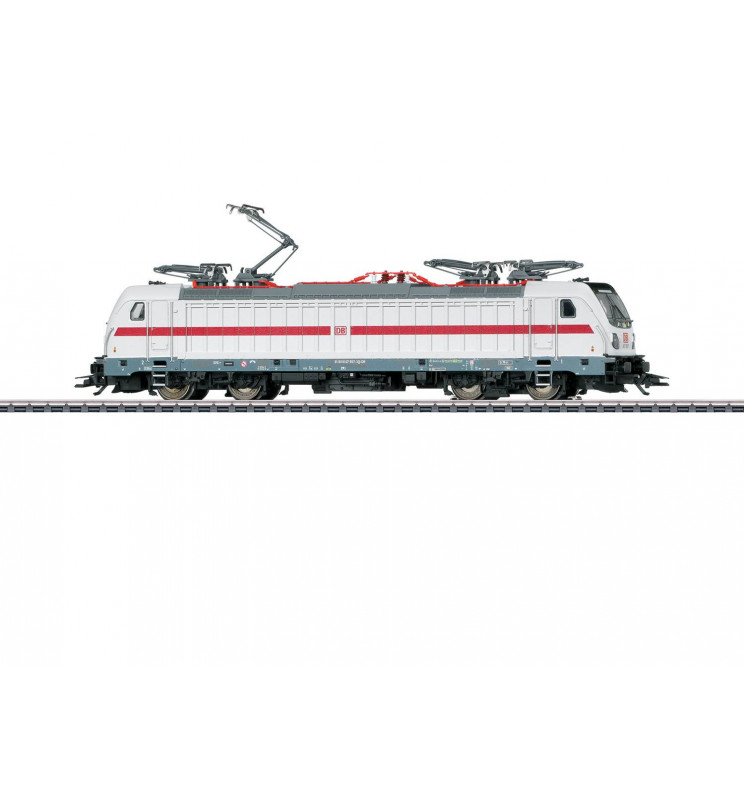 Model: This electric locomotive is constructed of metal and includes an mfx digital decoder and extensive sound functions. It also has a special motor, centrally mounted. 4 axles powered by means of cardan shafts. Traction tires. Triple headlights and two red marker lights change over with the direction of travel, will work in conventional operation, and can be controlled digitally. The headlights at Locomotive End 2 and 1 can be turned off separately in digital operation. When the headlights at both ends are turned off, then the "Double 'A' Light" function is on at both ends. Warm white and red LEDs are used for the lighting. There are 4 mechanically working pantographs (no power pickup from catenary). The side surfaces are modelled prototypically.Length over the buffers approximately 21.7 cm / 8-1/2".

For a long time, railroad passengers had to wait for new locomotives and rolling stock in long-distance service, but on September 23, 2015, movement finally came into the next generation of IC trains. The bi-level ICs from Bombardier were given provisional authorization by the EBA. As part of a press event several days later at the Potsdam station "Park Sanssouci", the DB AG presented the first bi-level, five-part Intercity to the public under the new slogan "IC 2". It was initially pulled by class 146.5 electric locomotives. Conceptually, the bi-level IC trains have been planned from the TWINDEXX series for the so-called edge network of long-distance service. These connections are certainly subject to weaker demand but they do represent important feeder services into the core network connecting metropolitan regions. A maximum speed of 160 km/h / 100 mph appeared sufficient since higher speeds cannot be run for long periods on many of the potential routes anyway.Starting with the annual schedule for 2019, the five-part, bi-level IC will also be running – handled moreover operationally as powered rail car trains – between Nürnberg and Munich, and Karlsruhe as well as between Stuttgart and Singen. Here the new class 147.5 TRAXX units will be serving as motive power. They are essentially the same as the class 147.0 (TRAXX P160 AC3) – naturally now with the long-distance service paint scheme. They are derived from the TRAXX 3 version from Bombardier first presented in 2011 and reworked further with extensive changes in particular to the trucks as well as an improved locomotive body. Road numbers 147 551-567 are also authorized for use in Switzerland and are available to the DB Long Distance Group for IC 2 service between Stuttgart and Singen.