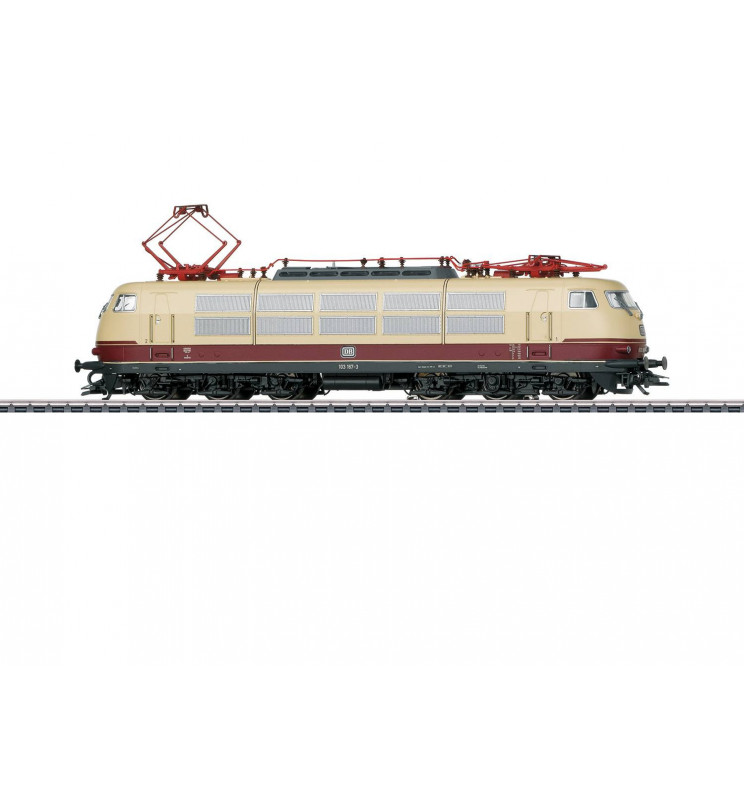 After delivery of four test locomotives of the new class E 03 (starting in 1968: 103.0) regular production was done starting in 1969 for the InterCity service (IC 71) planned to begin in 1971, but with new specifications. The effective load for TEE and IC trains at speeds of 200 km/h / 125 mph increased from 300 to 480 metric tons, and 800 metric ton D-Zug express trains had to be able to run at 160 km/h / 100 mph. The 145 regular production locomotives – now designated as the class 103.1 – had a basic design that followed that of the prototypes with a bridge frame, locomotive body consisting of five segments, and three-axle trucks. The same end shape was taken from the pre-production locomotives. The most striking thing externally was the doubling of the ventilation openings by a second five-part row of vent grills in the lower half of the side walls. This was caused by a larger air intake due to the greater performance of the locomotive. With a main transformer adjusted for maximum performance (continuous tractive effort output of 6,250 kilovolt amps) and type WBM 368/17f lightweight traction motors with a continuous rating of 1,240 kilowatts the result was a full increase in performance of 25.3% compared to the prototypes – an impressive 7,440 kilowatts or 10,116 horsepower. The last thirty units (road numbers 103 216-245) were equipped with a frame lengthened by 700 mm / 27-1/2" with larger cabs in order to realize the increase in size of the cramped cabs requested urgently by locomotive engineers. After being delivered in the years 1970 to 1974 the class 103.1 units immediately took over the new IC trains as well as the prestigious TEE trains that had now been partially integrated into the new IC network. Initially, the regular production units up to road number 103 215 were equipped with type DBS 54a double arm pantographs and type WB 15 Wanisch contact strips as well as upper arm shock absorbers. Yet this special design done for 200 km/h / 125 mph did not turn out well over time and caused catenary damage to the DB as well as the ÖBB network. The cause was thought to be contact pressure above the permissible 120 kilo-Newton / 26.97 kilo-pound force. The interim solution initially was partial replacement of the defective pantographs with the standard design type DBS 54 with a standard contact strip designed for a maximum speed of 160 km/h / 100 mph. Conversely, the last 30 units (road numbers 103 216-245) left the builder equipped with the single-arm type SBS 65 pantographs developed to production status in the meantime. Road numbers 103 101-215 were also supposed to be equipped with these single-arm pantographs,