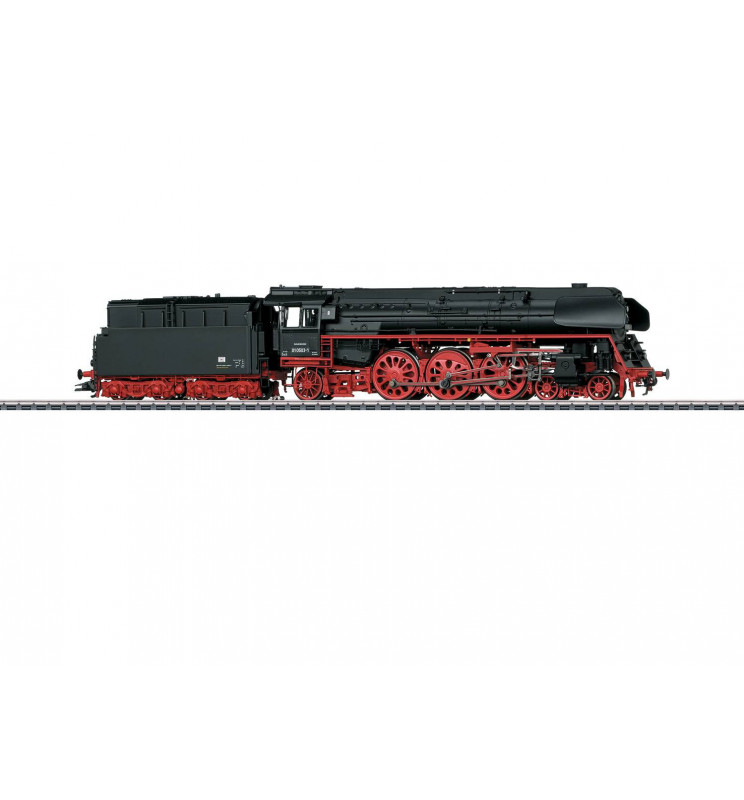 Model: The locomotive has an mfx+ digital decoder and extensive sound functions. It also has controlled high-efficiency propulsion with a flywheel, mounted in the boiler. 3 axles powered. Traction tires. The locomotive and tender are constructed mostly of metal. The 7226 smoke unit can be installed in the locomotive. The triple headlights change over with the direction of travel. They and the smoke unit that can be installed in the locomotive will work in conventional operation and can be controlled digitally. The cab lights can also be controlled digitally. Maintenance-free warm white LEDs are used for the lighting. There is a close coupling with a guide mechanism between the locomotive and tender. There is a close coupler with an NEM pocket and a guide mechanism on the tender. The minimum radius for operation is 360 mm / 14-3/16". Protective sleeves for the piston rods and brake hoses are included as detail parts. Length over the buffers 28.2 cm / 11-1/8".

With some luck it was also an elegant steam locomotive from the class 01.5, the swan song of steam locomotive reconstructions by the German State Railroad (DR) of the GDR. A total of 35 units of the class 01 underwent extensive reconstruction at the beginning of the Sixties. Initially, only the installation of a new welded boiler was planned, but the condition of the locomotives selected finally forced extensive conversions that in many parts made new locomotives out of the units. The maintenance facility in Halberstadt delivered the "Reko" boilers, and they were installed at the maintenance facility in Meiningen. During the rebuilding program the boiler was placed higher, continuous dome streamlining adorned the top of the boiler, and the cabs were replaced by a new welded version. The locomotives rebuilt in this way had hardly anything in common with their original look. After the rebuilding program, these units were therefore given the new class designation of 01.5. Beginning with road number 01 519 (rebuilt in 1964) the locomotives were equipped with oil firing, and the remaining units were converted accordingly in 1965/66. Only six locomotives kept grate type firing. Ten locomotives were equipped at times with Boxpok wheels.