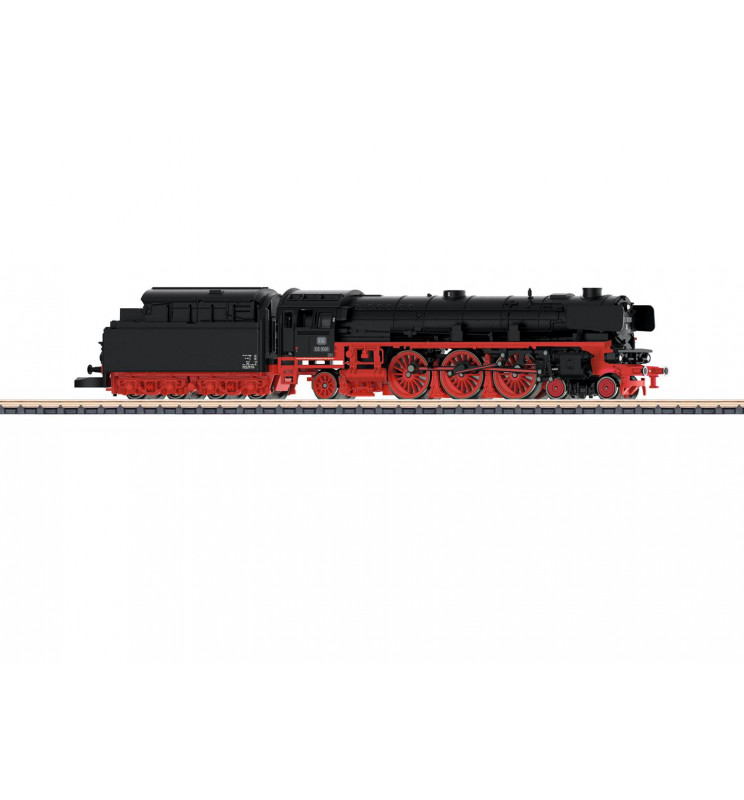 Model: The locomotive is new tooling that is finely detailed. The locomotive body is constructed of metal and has inset cab windows. There is modeling of the brakes, inductive magnet, track clearance devices, etc. on the underside of the locomotive. The headlights are freestanding. The valve gear and drive/side rods are finely detailed. The locomotive has a motor with a bell-shaped armature. All three (3) driving axles are powered. Warm white LEDs are used for the headlights on the locomotive and the tender, and they change over with the direction of travel. The tender has spoked wheels. Length over the buffers approximately 110 mm / 4-5/16". The minimum radius for operation is 195 mm / 7-11/16".

The three-cylinder class 03.10 was built starting in 1939 as a further development of the two-cylinder class 03. Like its two-cylinder sibling, it was planned for pulling fast passenger trains on main lines, which were not yet built for 20 ton wheel loads. The locomotives were given streamlining to increase performance and were originally authorized for a maximum speed of 150 km/h / 94 mph. Yet in 1941, this was lowered to 140 km/h / 88 mph. The units were designed as three-cylinder locomotives with simple steam expansion, and the inboard cylinder drove the first coupled axle. The two outboard cylinders drove the second coupled axle. The driving and coupled wheels had a diameter of 2,000 mm / 78-3/4", the pilot truck wheels 1,000 mm / 39-3/8" and the trailing truck wheels 1,250 mm / 49-1/4". With a performance of just 1,800 horsepower, the class 03.10 was designed to pull 540 metric ton express trains on level track at 120 km/h / 75 mph, on a 0.4% grade 360 metric tons at 100 km/h / 63 mph. The two prototype locomotives, road numbers 03 1001 and 03 1002 were delivered by Borsig in 1939, and another 138 units were supposed to follow them. However due to World War II, the total remained at 60 units, built by the firms Borsig, Krupp, and Krauss-Maffei. The locomotives were initially used chiefly in Southern Germany (based in Ulm and Nürnberg) and in Austria (based in Vienna West and Linz), but they were also concentrated in Breslau, Posen, Kattowitz, and Stargard. After the war, 26 units still remained with the DB and 21 locomotives with the DR. Since these were almost new locomotives, which had survived the war relatively undamaged, it was evident that the class 03.10 could go back into operation in a short time. During the refurbishing of the units, just the streamlining was initially removed and any war damage repaired.The rapid reconstruction and the "Economic Miracle" in West Germany also led to a blossoming of long distance travel. The class 03.10 could finally run as was originally planned for it. Compared to other classes it now achieved peak values in running performance, but this was also accompanied by increased wear and tear. As early as the mid-Fifties, the boilers on all units built of St47K steel that did not resist aging showed strong signs of fatigue. The DB therefore equipped all 26 locomotives between 1957 and 1961 with new welded high-performance boilers with a combustion chamber. The supplier was Krupp, but they were installed at the maintenance facility in Braunschweig. The units also had a mixing preheater as well as superheated steam regulators as part of the conversion (except for road number 03 1021). Roller bearings in the rods, lightweight wheel sets on the pilot trucks in some cases, and a stoker in combination with coalbunker hatches rounded out the conversion. The result with the "new" 03.10 was a highly modern steam locomotive for the time. Unfortunately, the new technology was not without pitfalls and its teething problems could never be co