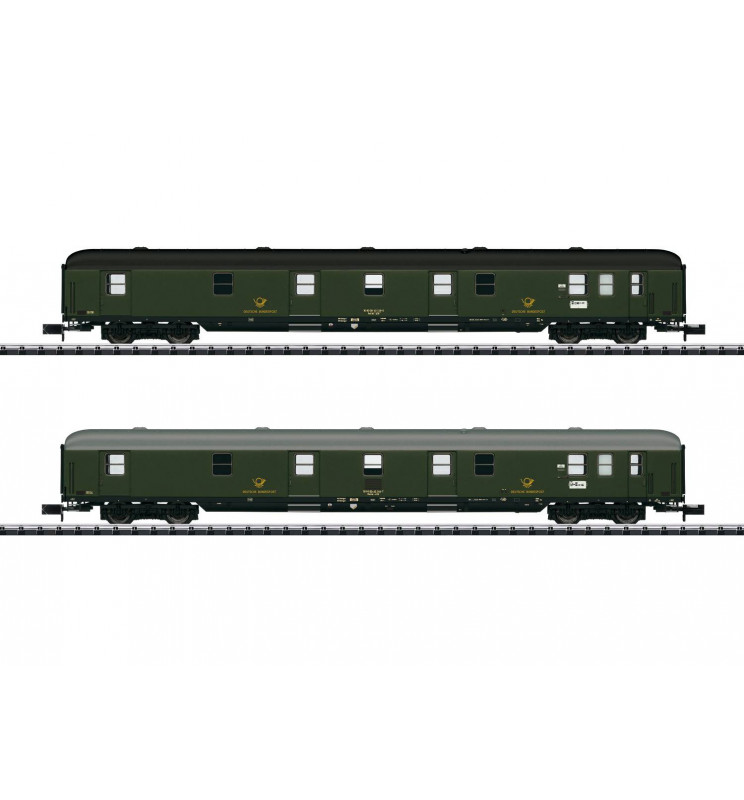 Model: The cars are new tooling. The cars have close coupler mechanisms. Interior lighting can be installed in the cars. Total length over the buffers 330 mm / 13".

T15540 – Type Post mr-a Railroad Postal CarAfter the new DB had decided on 26.4 meters / 86 feet as a standard for passenger cars at the start of the Fifties, the German Federal Postal System quickly saw the advantages of these long cars. It therefore contracted with a design partnership under the lead of the car builder Waggonfabrik Uerdingen for the development of 26.4 meter / 86 foot railroad postal cars for express trains. In line with the level of the technology, the following requirements were made such as widening the sliding doors for container service, increasing the load weight from 20 to 25 metric tons, car bodies fitting in with the look of the DB cars, installation of a forced air heating and dust removal system, and rubber diaphragms with roll-down doors. Out of this came railroad postal cars, which harmonized marvelously with the new DB cars. Their car bodies were built up in a welded design of steel shapes using a self-supporting shell construction, whereby the skirting formed a component part of the support construction. Their windows consisted of safety glass with a wire beading and were almost flush with the exterior wall. Particular emphasis was put on good heating and sound insulation. The interior space of the cars had a functional division in three parts consisting of a letter area, outgoing pouch area, and a package area. The equipment was done following the latest views such as baggage racks in the ceiling area, package frames, package grills, letter pigeonholes, sorting tables, folding tables, and outgoing pouch tables, pouch spreaders, letter pouch stanchions, and loading hatches. All of the outside doors were designed as wide, single-piece sliding doors of lightweight metal construction. The forced air heating and dust removal system mounted for the most part under the floor was noteworthy. Enough fluorescent lamps with a lighting intensity never achieved in the past gave good lighting at all workstations.In line with their intended use, the railroad postal cars were set up to haul postal mailings of all kinds. All postal mailings (letters, small packages, and packages) were processed before and during the trip. Naturally, these cars were used mainly at night, since the bulk of postal mailings were handed in by senders in the afternoon and evening, and they were supposed to reach their destination the next morning. In some cases, these cars were used in special mail trains, but it was common to see them also in "D-Zug" express trains and "Eilzug" limited stop fast trains as well as other types of trains on the German Federal Railroad. The era of railroad mail did not come to an end until 1997, since the German Postal System, with a fundamental restructuring, now favored sorting in newly created, automated letter distribution centers, which were no longer close to the tracks.