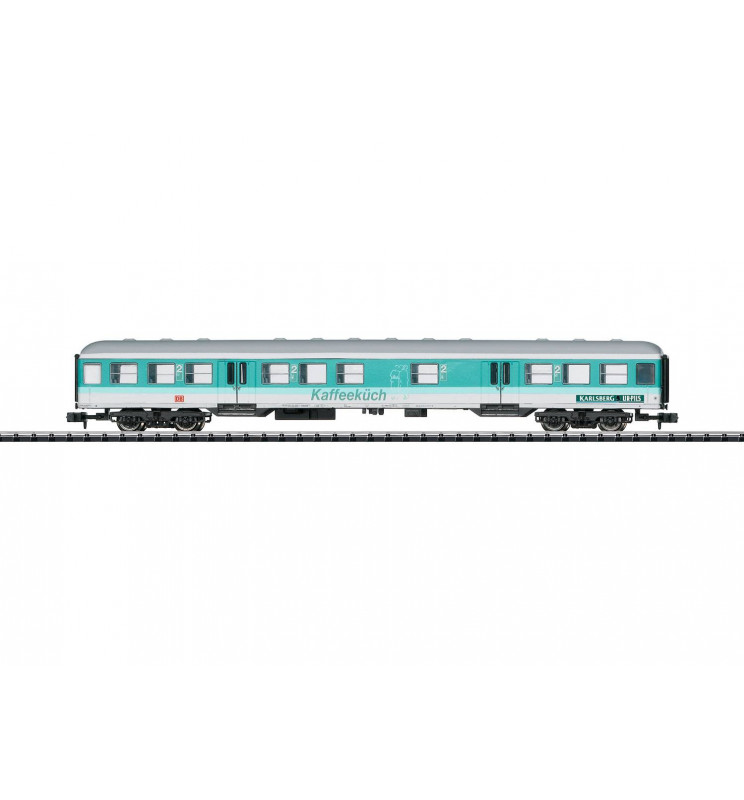 Model: The car has a close coupler mechanism. Interior lighting can be installed in the car. Length over the buffers 165 mm / 6-1/2".

Starting in the mid-Eighties the DB worked intensively on the problem of how to make commuter and regional service more attractive, since a large growth potential was assumed here. Yet there was no money available for new modern cars and locomotives. Around 5,000 "Silberlinge" / "Silver Coins" were present however that at that time had reached around half of their useful life and were due for major overhauls. The DB therefore decided to make the "Silberlinge" more attractive as part of the overhauls that were due. Among these overhauls were equipping the cars with new materials and colors, better seats, luggage racks and trash containers, an enclosed restroom system, and a general-purpose area with fold-down seats for wheelchairs, bicycles, and baby strollers. A new product-specific external paint scheme was also part of this in the sense of "corporate identity". Initially, various rebuilt variations were tested in the regions of Cologne/Gummersbach, Hamburg, and Stuttgart. The results of these variations was the "Hannover" design that was applied in 1988/89 to an advance series of 78 cars. A small series of 57 cars followed in 1990 for the area of Saarbrücken, whereby ten cars were equipped with a buffet compartment at the special request of the party placing the order. These cars were called "Kaffeeküch" corresponding to the Saarland dialect and were designated this way on the sides of the cars. The cars now had a dining area in the middle of the car with 16 place seats at four tables as well as five standup tables. In addition, there was a glassed-in counter operated by the meat products company Schröder in Saarbrücken. In addition to coffee and kiosk items, you could also get fresh sausage dishes here.Externally the cars were very recognizable with the large lettering "Kaffeeküch", the stylized image of two people at a standup table and the advertising for the meat products company Schröder, later replaced by advertising for Coca Cola and Karlsberg beer. In the beginning, the "Kaffeeküch" cars ran in the CityBahn / City Railroad trains on the route Trier – Saarbrücken – Homburg – Kaiserslautern. Later they were used on the StadtExpress / City Express trains on the route Trier – Saarbrücken – Kaiserslautern – Mannheim – Heidelberg – Karlsruhe – Offenburg – Freiburg and at the end they ran with the Regional Express trains between Trier-Koblenz, whereby the catering was now done by ISB-Service from Koblenz. Their use ended in 2002/03 and most of the "Kaffeeküch" cars were converted or scrapped. Only one car was acquired by a private party and it is supposed to be put back into operational condition.